In 2010, DC Comics began publishing a series of graphic novels entitled Earth One, which retells the earliest adventures of DC’s most popular characters without the restraints of continuity. The flagship of this venture was Superman: Earth One, written by Babylon 5 creator and long-time Superman fan J. Michael Straczynski.

What sets Superman: Earth One apart from other origin stories is that it shows the reader a Clark Kent at a crossroad in his heroic journey. Having super-powers does not automatically draw him to the conclusion of being a super-hero. He tries his hand at professional sports, scientific research, and financial services. He excells in all of these fields, but he is left disappointed, disillusioned, and wanting. Only an alien invasion that threatens the extinction of the Human race prompts into becoming the hero he was born to be.

It has jokingly been said that Batman’s super-power is being rich. With all of his superhuman abilities at his disposal, it could be argued that Superman’s super-power is that he can do whatever he wants. He could be a star football player, or a nobel prize-winning scientist, or a multi-billionaire stock broker. The fact that he chooses to use his powers to help people and serve humankind is a testament to his character.

Superman: Birthright was Superman’s official origin story from 2003 until 2006’s Infinite Crisis. Okay, so as far as track records for definitive origin stories go, that’s not all that impressive. Be that as it may, Birthright stands apart from all of the other origin stories in its ambition and its approach.

It explores the separation between the Superman and Clark Kent identities in further detail. In this incarnation, Waid emphasises more on Superman as the main persona, while Clark Kent is a carefully-crafted disguise made to draw attention away from the fact that he is really Superman. As a result, however, it also shows Clark struggling to make connections with people around him while using a disguise that designed to make him ignored.

More importantly, however, it explores Superman’s motivations. It shows what causes the Man of Tomorrow to don the red-and-blue tights, to fight for truth, justice and the American way. The thesis presented in Birthright is that Superman’s powers are part of his identity, and that the use of those powers are the ultimate expression of who he is. Therefore, the Superman persona is a means for him to use his powers in service to people, to connect with others.

“Up there, I didn’t have any worries, any questions. Nothing affected me. At least — that’s what I thought.”

What if you were named Clark Kent? You live in a world where Superman and super-heroes in general are nothing more than fictional characters. So the fact that you share the same name as a well-known cultural icon often makes you the butt of jokes from your friends and family.

Now, what if one day you discovered that you actually had real-life super-powers, just like Superman? You can fly, run faster than a speeding bullet, and shrug off mortal danger. Would you do it? Would you have it in you to become a real-life Superman?

These are the kind of questions that Kurt Busiek and Stuart Immonen ask in “Superman: Secret Identity”, showing us what being Superman would be like in the real world. As the reader, we are put in the shoes of a young boy named Clark Kent, who happens to share the same name as Superman, much to his constant embarrassment.

However, as he grows up, he discovers that he has fantastic powers far beyond those of mortal men. The implications and responsibilities that come with them follow Clark throughout his life, as he grows up, graduates high school, falls in love, and even starts his own family.

“I want you to stop looking for a great savior. Lex Luthor isn’t it. I’m not it. You are. All of you are. I do what I do because I was given a gift, but all of you were given gifts, too. Use them to make each other’s lives better.”

You may have noticed that several different versions of Superman’s origin story appear on this list. First Superman: The Man of Steel, then Superman: Birthright, and now Superman: Secret Origin. One way of looking at this occurrence is that Superman is a hard character to write, that writers struggle to give him a proper beginning. Another way of looking at it, however, is that a great story can be interpreted several different ways, reinvented whenever new insights into the character are discovered. If anything, Superman’s origin is a story we love so much, we enjoy reading about it over and over again.

Secret Origin may not be quite as innovative as The Man of Steel or as ambitious as Birthright, but it is by far the most enjoyable. It is a near-perfect amalgamation of Superman’s Silver Age and Modern Age incarnations, even going so far as to reintroducing legendary tropes such as being Superboy as a teenager, adventuring with the Legion of Super-Heroes, and even Krypto the Super-Dog.

It also implements various elements from Superman’s vast 75-year history, including Lois and Clark: The New Adventures of Superman, Superman: The Animated Series, and Smallville. Artist Gary Frank especially incorporates Richard Donner’s Superman films; any astute observer will easily notice Superman’s uncanny resemblance to Christopher Reeve, one of the most memorable actor ever to portray the Man of Steel. 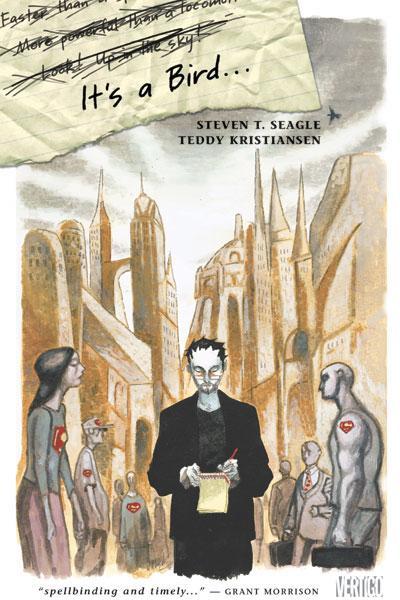 “That’s what Superman is all about. To remind us that we have hurdles. But as long as we keep jumping them, we’re in the race.”

It’s a Bird is an autobiographical graphic novel by Steven T. Seagle, depicting the life of the comic book writer as he is approached to write for Superman. While most would jump at the chance to write for one of the most popular super-heroes in comic books, Steven is somewhat less than enthusiastic about accepting the offer. In fact, he is adamantly looking for ways to avoid the assignment altogether. Although he has his own misgivings about the “reality” of the character, his journey is about more than just overcoming writer’s block.

This book is primarily an introspective exploration of the Superman character as a literary figure. It deals with the Man of Steel primarily through Steven’s perspective. His disdain for the character gives a voice to the critics and nay-sayers of the Man of Steel, and it challenges hardcore fans to re-evaluate their love for the character. Whether you are a critic or a fan, this book will not necessarily make you move your tent to the opposing camp. Either way, however, you will gain new insight into the character.

Join us next time for part 4!