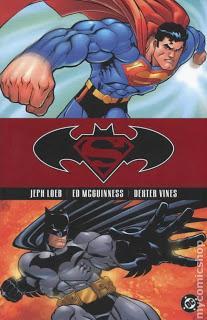 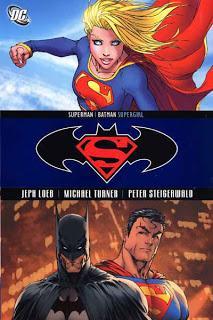 “It is a remarkable dichotomy. In many ways, Clark is the most human of us all. Then he shoots fire from the skies and it is difficult not to think of him as a god. And how fortunate we all are that it does not occur to him.”

A giant Kryptonite meteor is bound for Earth. Lex Luthor, as President of the United States of America, claims Superman responsible and declares him an enemy of the state issuing a one-million dollar bounty for his capture dead or alive. Pursued by super-heroes and super-villains alike, Superman must team up with Batman in order to clear his name, expose Lex Luthor’s political corruption, and save the Earth from armageddon.

The kryptonite asteroid is revealed to have carried a pod containing Superman’s cousin Kara Zor-El. Superman is overjoyed at finding a kindred spirit, a survivor of Krypton’s destruction other than himself, and a family member no less. Batman finds her arrival suspicious and believes her to be dangerous. Other parties are also interested in the arrival of another surviving Kryptonian. From Themyscira, Wonder Woman believes that Kara should be trained in the Amazon ways in order to hone her powers. From Apokolips, Darkseid wishes to groom her as the leader of his bodyguard elite, the dreaded Female Furies.

Superman/Batman: Public Enemies is an action-packed thrill-ride that has you on the edge of your seat from beginning to end. It stars Superman and Batman, arguably the two greatest super-heroes in the DC Universe, teaming up against Superman’s arch-enemies. It’s also bursting at the seams with guest appearances, whether it’s super-villains clamoring for the bounty on Superman’s head, super-heroes coerced into bringing Superman to justice, or even the Super and Batman families joining together on a covert mission to infiltrate the White House.

The follow-up, Superman/Batman: Supergirl, reintroduces Kara Zor-El as the one true Supergirl from Krypton back into the DC Universe. Kara is put through a good old-fashioned Hero’s Journey. She’s a prodigal super-hero. She’s effectively apprenticed to Superman, Batman and Wonder Woman (honestly, you couldn’t ask for better teachers.) She faces temptation and adversity from Darkseid, a proverbial devil who tries to lure her towards a darker path. Her journey takes her across the DC Universe, from Gotham City to the Batcave, from the Fortress of Solitude to Metropolis, from Paradise Island to Apokolips (i.e. Hell) and back again.

What really shines through is Jeph Loeb’s style of writing, who has a penchant for narrating through the protagonist’s perspective. In Superman/Batman: Public Enemies, we are offered the simultaneous inner-monologue of both Superman and Batman, showing how both characters view each sitiuation differently and yet still come to the same conclusion. 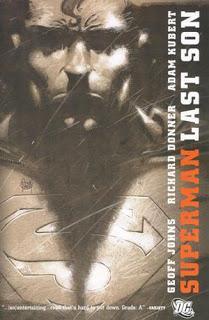 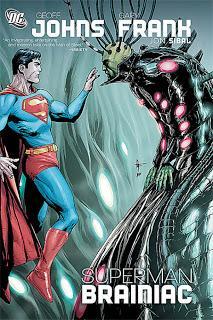 “A young boy fell from the sky, You took him home. You forged documents, You raised him as your own. Tell me how you did it.”

A rocket ship lands in Metropolis, containing what appears to be a Kryptonian boy who has developped powers like Superman. Clark Kent and Lois Lane decide to adopt the child as their son, naming him Christopher Kent (an affectionate tip-of-the-hat to the late Christopher Reeve.) It eventually becomes apparent that the Chris is actually the son of General Zod, who has escaped from the Phantom Zone with the intent to conquer Earth. Superman is forced to join forces with Lex Luthor and his Superman Revenge Squad (which includes Bizarro, the Parasite and Metallo) to take on General Zod and his Phantom Zone minions in an all-out battle for Metropolis.

Written by Geoff Johns in collaboration with Richard Donner, the legendary director behind the first two Superman movies, Superman: Last Son stands out as the quintessential General Zod storyline. Essentially a love song to Superman II, Last Son reintroduces Zod into the DC Universe, as well as several other elements of Superman’s mythology including the Phantom Zone, Zod’s more traditional cohorts Ursa and Non, and the Daxamite Mon-El. It also fits Superman in the role of a father that is far more believable and compelling than the the misguided attempt shown in the 2006 film Superman Returns.

Aside from Lex Luthor, Brainiac arguably one Superman’s most recognized super-villains. This book is a perfect explanation of why that is. What we have left is super-intelligent alien cyborg from the planet Colu, cold and calculating, completely devoid of emotion and compassion. His goal is to expand his knowledge by securing samples of various intergalactic civilizations, before wiping them off the face of the universe. He has done this to Kandor, possibly even connecting him to the destruction of Krypton. And Earth is next!!

In Superman: Brainiac, Geoff Johns gives Brainiac the same retroactive treatment he gave General Zod, bringing the character back to his roots. Supergirl’s words say it all: “Brainiac is everything bad about aliens.” This Brainiac is not only an intellectual rival of Superman, but a physical rival. He towers over Superman, and he is able to match him in battle. Brainiac is an allegory for every negative, evil aspect of aliens in science fiction. He is the martians from War of the Worlds, the robots from The Day the Earth Stood Still, the xenomorphs from the Alien films, the Borg from Star Trek, and the sentinels from the Matrix. 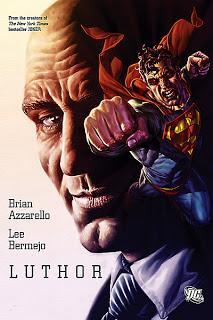 As the old saying goes, “a hero is only as good as his villain.” This could be why some of the most popular super-heroes boast some the most colourful rogues galleries. While Superman may have a wide variety of foes, none of them quite hold a candle to Lex Luthor, who is widely regarded as Superman’s greatest super-villain, if not his most recognizable. He is in many ways Superman’s antithesis whereas Superman is a selfless and compassionate benefactor to all of humanity, Lex Luthor is a selfish and uncaring megalomaniac.

Luthor, however, would have you think differently. Originally titled Lex Luthor: Man of Steel, Luthor is a story told through the perspective of Lex Luthor himself. Lex sees himself as the pinnacle of human perfection, the ideal that everyone should strive to achieve. In contrast, Lex views Superman as a threat to humanity growth as a species, an alien invader who could become a ruthless tyrant at any given moment, whose never-ending fight for truth and justice is meaningless in the grand scheme of things. Therefore, Lex’s ongoing confrontation with the Man of Steel is a philosophical one.

Lex’s true nature, however, is revealed between the lines. For all his posturing, he is not above resorting to extortion, bribery, blackmail or deceit to suit his needs. In his quest to rid the world of Superman, he creates a super-powered android of his own design.

Brian Azzarello does a fantastic job establishing Lex Luthor as a sympathetic protagonist. Luthor’s indefatigable ego seems to permeate the pages of the book itself, warping the artwork to suit his own perspective; indeed, Lee Bermejo seems to have intentionally depicted Superman as a menacing and at-times demonic figure in accordance with Luthor’s assessment of the Man of Steel.

7) THE DEATH AND RETURN OF SUPERMAN 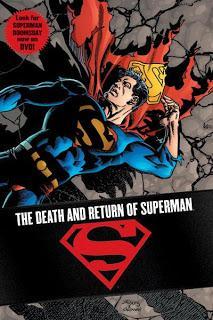 This entry may not be the best on this list, but it is by far the most famous. Widely regarded as one of the best-selling comic book series of all time, the death of Superman received an unprecedented amount of media attention, which contributed to its high sales and popularity. Its unforetold success arguably inspired similar storylines throughout the comic book industry, including Batman’s Knightfall or Green Lantern’s Emerald Twilight. This entire storyline is collected into three separate trade paperbacks, which are described as followed:

a) The Death of Superman: A hulking monstrosity of unknown origins (whom Booster Gold appropriately names “Doomsday”) rampages across America, leaving a senseless path of destruction in its wake. The Justice League of America are sent to stop Doomsday, but even their combined might proves ineffective against the monster’s unstoppable brute force. It soon becomes apparent that only Superman can stand against Doomsday. Battling their way throughout America, the two fight to a standstill as they reach the heart of Metropolis, where Superman gives his life to bring an end to Doomsday’s rampage once and for all. This fight was the metaphor of an unstoppable force meeting an immovable object brought to life, with Doomsday emulating a destructive force of nature, and Superman being the only one who could match its power.

b) World Without Superman: The true impact of Superman’s death is felt in this follow-up, in which the people of Metropolis struggle to cope with the loss of their champion. It especially dealt with the emotions felt by characters central to Superman’s world, including Lois Lane, Clark Kent’s parents, and even a number of super-villains. A mausoleum is built in Metropolis in honor of the Man of Steel. His funeral is presided by many of Superman’s fellow heroes and friends, including most of the Justice League of America. With Superman gone, the remaining costumed heroes of Metropolis rise to fight the unprecedented rise in crime. Meanwhile, Project Cadmus has stolen Superman’s body in an attempt to clone him, and it is Lois Lane and Supergirl to stop them.

c) The Return of Superman: Just when the world has finally come to terms with Superman’s death, four new super-heroes arrive in Metropolis, each claiming to be Superman in some form or another. The first is a energy-powered alien who dispatches criminals with lethal force; the second is an ironworker who fashions a suit of armor to honor Superman’s memory; the third is a cyborg constructed from advanced Kryptonian technology; and the fourth is a reckless teenage clone of Superman. One of them, however, is the herald of an alien invasion determined to destroy Earth in Superman’s name. Only the one, true Superman will have what it takes to save the world from annihilation. 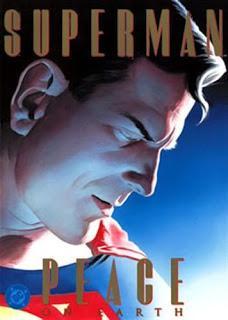 “I look upon my powers as a gift, not mine alone but for anyone who needs them.”

With the reluctant approval of the United Nations, Superman makes a concentrated effort to end world hunger. He travels to impoverished and starving countries all over the world, carrying with him giant tankers filled with food. Even with his vast superhuman powers, however, this task proves to be more difficult than he anticipated. Throughout his journey, his arrival is met with varying levels reactions. Some greet him with gratitude and reverence, while others meet him with suspicion, fear, and even outright hostility.

With a character as powerful as Superman, one of the hardest questions posed about his character is why he doesn’t use his abilities to bring about real change in the world, such as ending world hunger. It’s a question that has plagued the Man of Steel since his inception. This book illustrates that even Superman has limitations that he can’t be everywhere at once, and that even he can’t completely overcome human adversity. It’s the same problems that real-life heroes struggle with in order to make a difference in the world without the benefit of super-powers.

Join us next time for our final part! The top 5!