5) SUPERMAN FOR ALL SEASONS 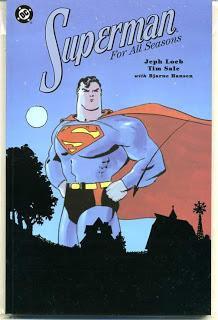 Yet another origin story!! What are the chances?! Don’t worry, this is the last one, I swear … Naturally, I saved the best for last.

Hot off the success of their critically-acclaimed success Batman: The Long Halloween, Jeph Loeb and Tim Sale brought us Superman For All Seasons, a true coming-of-age story about the Man of Steel, describing not only how the man became a Superman, but more importantly how the boy became a man. Superman has often described as one of the most human super-heroes of all, which is ironic considering his extra-terrestrial origins. This is the book that best illustrates this, showing us a Superman who can be nervous and awkward, who can doubt himself, who can make mistakes and learn from them.

The focus revolves around Clark Kent’s upbringing in the small town of Smallville, Kansas, how his adoptive parents have helped shape the values that led him to become Superman, and how he still considers it home even after he has made a life for himself in Metropolis. It should be no surprise that Superman For All Seasons was a significant source of inspiration for the television show Smallville.

Superman For All Seasons is divided into four chapters, each representing one of the four seasons (Spring, Summer, Fall and Winter.) Each chapter is narrated by a central character in Superman’s life (Pa Kent, Lois Lane, Lex Luthor and Lana Lang, respectively.) It’s an unusual approach, considering that the story revolves around Clark Kent and Superman, but it definitely works here. The book doesn’t just show you what it means to be Superman, but also what it means to know Superman through the eyes of a father, a lover, a rival, and a friend.

4) SUPERMAN: WHATEVER HAPPENED TO THE MAN OF TOMORROW? 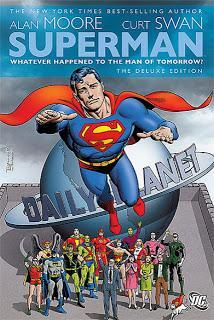 “This is an imaginary story … Aren’t they all?”
–Alan Moore

Alan Moore has often been described as the best graphic novel writer in history. While he is primarily well-known for his original works such as Watchmen and V for Vendetta, he also worked on big name characters from DC Comics such as Batman (Batman: The Killing Joke) and … of course … Superman. Superman: Whatever Happened to the Man of Tomorrow is a compilation of all of Moore’s works starring the Man of Steel.

“Whatever Happened to the Man of Tomorrow?” depicts the final adventure of the silver-age Superman, before he would eventually be rebooted by John Byrne’s “Superman: The Man of Steel”. Moore honors the long history of Superman’s mythology and brings his story to a fitting and bittersweet end. The story was also drawn by long-time artist Curt Swan, in his final major contribution to the Superman titles. The story recounts the public revelation of Superman’s secret identity as Clark Kent, a final confrontation against many of his greatest foes, a number of deaths of those closest to him, and the last known appearance of Superman.

“For The Man Who Has Everything” has Alan Moore collaborating with Dave Gibbons. This is the same legendary duo who brought us Watchmen, arguably the greatest graphic novel of all time. Batman, Robin and Wonder Woman travel to the Fortress of Solitude to celebrate Superman’s birthday, only to find him under the thrall of the Black Mercy, courtesy of Mongul. The Black Mercy is a parasytic plant that feeds its victim an extremely realistic dream state based on his heart’s desires. We learn that Superman’s dream is to live a normal life on his long-destroyed homeworld of Krypton, happily married with children. While the other heroes struggle against Mongul, Superman struggles to accept that the dream he is experiencing isn’t real. 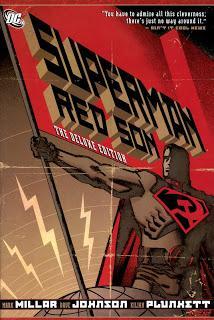 “The Champion of the common worker who fights a never-ending battle for Stalin, socialism, and the international expansion of the Warsaw Pact!”
–Josef Stalin

Mark Millar’s Superman: Red Son is easily one of the best “Elseworlds” ever published, even if it doesn’t officially brandish the “Elseworlds” logo. It asks perhaps the most innovative “what if” question of all: What if Superman had been raised in Soviet Russia instead of the United States? The result is not only an ironic take on an otherwise iconic American super-hero, but also a compelling perspective in the history of the Cold War.

This Superman was raised in a collective farm in Communist Russia. Over the intervening years, Superman becomes a member of Joseph Stalin’s inner circle and is used as a propaganda machine to bolster the Soviet regime. When Stalin passes away, Superman reluctantly assumes political power. Superman’s Global Soviet Union has eliminated war, poverty, disease, crime, and unemployment. His utopia, however, comes at the cost of increased infringement on individual liberties, and people are no longer in control of their own destinies.

Lex Luthor is a brilliant scientist Hell-bent on destroying Superman; however, because the United States have hired him to neutralize the Man of Steel (via CIA agent Jimmy Olsen), that makes him an American hero. He creates Bizarro, U.S. government-funded attempt to duplicate Superman. He also creates a vast array of super-powered villains (Metallo, Parasite, even Doomsday) who in this universe are American-made superweapons fighting for the American cause. Make no mistake, however. Luthor is still a cold-blooded egomaniac, regardless of which universe he resides in.

The Russian Man of Steel is a living metaphor of the Orwellian “Big Brother” who can see through walls and overhear private conversations across the globe. He also functions as an allegory for the arms race; with Superman championing as on the side of Soviet Russia, the Cold War escalates to a metahumans armed race, as the United States struggle to establish super-powered figures of their own to counter the potential threat Superman poses.

The best way I can describe Red Son is as a historical or geo-political Bizarro World. By making Superman Russian, Millar not only shows us a Superman from another country, but offers us a chance to look at what the world itself would have been like had Russia dominated the Cold War. 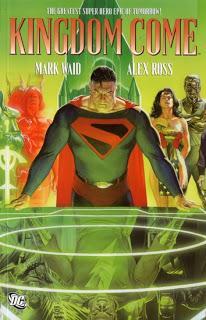 Mark Waid and Alex Ross reinvent the DC Universe in their unforgettable grand opus Kingdom Come, in which the Man of Steel himself plays a central role. Mark Waid’s writing abilities are at their apex in this book, bringing his encyclopedic knowledge of the DC Universe to the forefront. Alex Ross’s artwork is utterly sublime, re-envisionning iconic characters in ways never imagined before.

In this world, it has been nearly a decade since Superman’s self-imposed exile, disillusioned by the new generation of super-powered Metahumans who show a reckless disregard for human life. He is coaxed back into action following a terrible tragedy that destroys much of Kansas, determined to reunite the Justice League of old and rein in the Metahumans. It is a mythic tale of old versus new, youth versus experience, tradition versus change.

Kingdom Come is essentially a comic book interpretation of Revelations, with its central plot being predicated on Superman’s proverbial second coming. His rival Magog, a super-powered vigilante with no reservations against killing criminals, is a proverbial false idol complete with a ram’s horns; in fact, Ross intentionally designed Magog as a representation of everything he thought was wrong with super-heroes at the time.

Despite the abundance of super-heroes and super-villains fighting an epic final battle, what really ties this story together is the perspective and narration of Norman McCay. A disillusioned pastor whose loss of faith mirrors Superman’s. Effectively chosen by God to bare witness to the impending apocalypse, McCay offers a sophisticated layman’s perspective for the reader to follow the story. Furthermore, it’s rather heartwarming to consider the fact that Norman McCay is visually based on Alex Ross’s own father, Minister Clark Norman Ross.

What The Dark Knight Returns did for Batman, Kingdom Come did for Superman. As alternative interpretations to the Man of Steel go, this Superman is by far one of the greatest. Super-heroes are certainly figures you can look up to when you’re younger. As you grow older, though, it might be more and more difficult to keep your head up, especially once it looks like you’ve surpassed their age. You might ask yourself “Will I still be able to take Superman seriously once I’m older?” That’s one of the many reasons why Kingdom Come is so special, because we are given an older, wiser, and more seasoned character, deeply shaken by past experiences and searching to restore his faith. 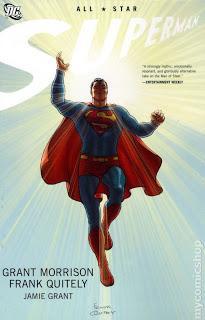 “You’re much stronger than you think you are. Trust me.”
–Superman

Dr. Leo Quintum and his team from P.R.O.J.E.C.T. undertake the first manned mission to the sun, when it is sabotaged by Lex Luthor. Superman saves the day. In doing so, however, his cells have become over-saturated with solar radiation, and he has one year left to live. True to his nature, Superman spends his last days in service to humanity and completing his last will and testament, all the while facing a series of threats that include an Ultra-Sphinx with an unanswerable question, a time-eating monster, an entire planet full of Bizarros, a living solar computer, and even a super-powered Lex Luthor.

All-Star Superman is widely considered as one of the greatest Superman comic books ever published, and for very good reasons. Morrison and Quitely spin a tale that doubles as a love letter to Superman’s mythos, especially the Silver Age. Elements such as Krypto the Super-Dog, the golden key to the Fortress of Solitude, Super-Robots, and even Jimmy Olsen gaining super-powers all enter into the mix, reintroducing them in ways that at once make them seem perfectly rational as well as celebrate their irreverence. This book actually implements the most entertaining use of Bizarro’s backwards language that I’ve ever read.

The story itself is ripe with mythological allegories. Dr. Leo Quintum mission to take fire from the sun mirrors the story of Prometheus stealing fire from the gods of Mount Olympus. Superman’s encounter with the Ultra-Sphinx and his unanswerable question is an obvious reference to the sphinx’s riddle to Oedipus. Superman even meets with two mythological figures Samson and Atlas, who allude to twelve super-feats Superman must accomplish before he dies, much like the twelve labours of Hercules. Even Superman’s impending departure itself has mythological significance, which will usher in a new Age of Man.

Throughout All-Star Superman, Grant Morrison and Frank Quitely presents to us Superman at his absolute best, an all-powerful benefactor who is calm, cheerful and optimistic even in the worst of times. The nature of his character is to do good, to serve humanity even in his last moments, to give his own life meaning down to his final breath, and to leave this world a far better place than before.

Ultimately, All-Star Superman celebrates what Superman represents. In the end, it’s not about what you’re capable of. Rather, it’s about what you do with those capabilities. Even with his alien origins god-like abilities, Superman remains the most human super-hero of all because he does good for its own sake. That is how Superman inspires us. Not through his abilities, but through his example.

All-Star Superman was adapted into a direct-to-video animated film by Warner Premiere and Warner Bros. Animation in 2011.

What are your favourite Superman stories? Let us know in the comments below.