Batman: The Dark Knight Returns was one of the first attempts to move comic books away from the campy kid-friendly and back into the realm of grim and gritty. It might even be single-handedly responsible for diverging the Batman mythos away from the Adam West-like quality that perpetuated through the Pre-Crisis years.

It is easily counted among the best Batman comic books of all time. You know you’ve struck gold when your work is often mentioned in the same sentence as Alan Moore’s “Watchmen”. Although this probably has more to do with the fact that they were both published around the same time (1986-1987). Still, it’s hard to deny just how much it has forever changed the face of comic book literature as we know it.

Its popularity has only become even more evident since then. Christopher Nolan’s “The Dark Knight Rises” has story elements loosely based on your work, at least the concept of Batman coming out of retirement. If that’s not enough for your tastes, Warner Brothers recently released a two-part animated feature adaptation, with Batman’s own voice provided by none other than Robocop himself, Peter Weller. 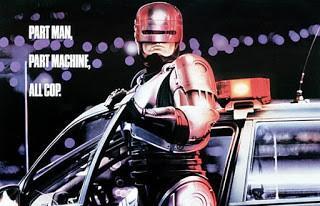 The story begins roughly twenty years into a dystopian future, set after an unspecified incident that turned the government’s judgemental and scrutinizing eye to the superhero community and forcing many of them into retirement. Although based on the context of this book, apparently its insidious origins have something to do with Ronald Reagan.

Bruce Wayne is in his 50’s during this story, marking his eventual return as Batman something of a super-hero version of a mid-life crisis. It’s hard to imagine anything that would deter Batman from his crusade against crime; but in this story, it’s implied Batman retires following the death of Jason Todd, the second Robin. Batman, among other super-heroes who have been publically criticized as vigilantes, hasn’t been seen in ten years.

In order to silence his inner-demons, Bruce Wayne has resorted to alcohol and apparently invoked his inner Tom Selleck by growing a moustache. The alcoholism, I can understand from a dramatic perspective. The moustache, on the other hand, is just plain confusing. To be honest, most of the (albeit short) time when he was sporting it I often mistook him for Commissioner Gordon. Thankfully, it only lasted a few pages.

Of course, it’s evident that Bruce can’t stay out of the fight forever. Never mind the fact that Gotham City hasn’t done very well without him. No matter what the reason he’s turned his back on the cape and cowl, as always he has his own personal demons that can never be ignored. Like the great Sherlock Holmes, Bruce Wayne is wasting away in the absence of his stimuli, which is to strike fear into the hearts of criminals. It’s fitting that the catalyst that makes him become the Batman once again is a reminder of that fateful night when his parents were murdered, a night that will forever continue to define who he is. 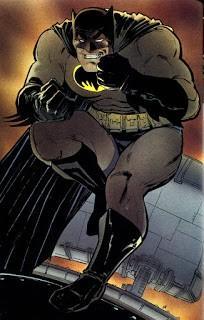 I forget where I read this, so you’ll have to forgive me for the plagiarism, but I remember an interview with Frank Miller where he admitted to writing Batman as older so that he could better relate to him. This is something I can actually sympathize with. Superheroes are certainly figures that children look up to when they’re young, but it can become increasingly difficult to look up to them when you actually seem to surpass their age. Will I still be able to take Superman seriously once I’m older? That’s one of the reasons I liked Kingdom Come, because we’re given an older and wiser Superman than the mainstream version. For that same reason, I can similarly look up to Batman in DKR. 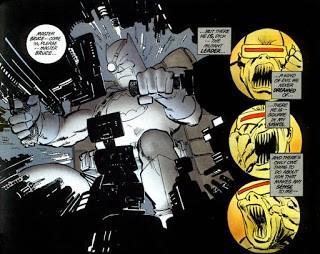 The Dark Knight’s struggle against his own age is exemplified in his fight against the Mutant Gangs, a new generation of criminals who terrorize Gotham. Even though he yearns to prove himself in combat, he finds that physically he can barely keep his own. But like the fedora-wearing one himself once said, “It’s not the years, it’s the mileage.”

At the heart of this story is a commentary that takes an introspective look at the thin line that separates superheroism from vigilantism. With a retiring Commissioner Gordon no longer able to vouch for him, Batman is regarded as a vigilante and by extension no better than a criminal. This aspect of the story is best exemplified in the satirical depiction of the media. 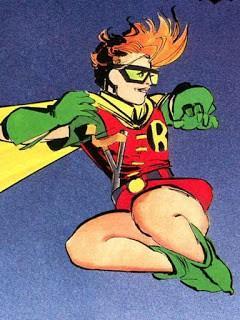 I would be remiss not to mention Carrie Kelly, an adventurous teenage girl who becomes the new Robin. She was by far the greatest highlight of DKR. The fact that she was a girl was endearing, because it was something that was never done before. Not only that, but she was a nerdy young teenager, which gave us the readers someone we could easily relate to. It stapled the idea that Batman always needs a Robin, someone with light-hearted innocence to soften the Dark Knight’s dark and disturbing disposition. 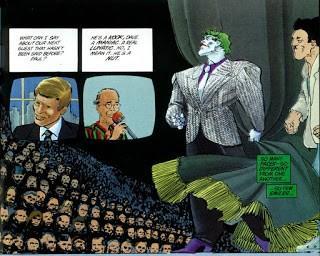 As, always the Joker completely steals the show. DKR offers a rather inspired look into the mythology of the character. It has often been theorized that the Joker exists because of Batman, as if to appease some sort of proverbial cosmic balance.

And yet, despite all the praise, it isn’t without its flaws. Yhe Dark Knight Returns works great as a stand-alone Batman story. The central themes of Batman regaining his former glory, vigilantism and persecution from the establishment were brilliant in an of themselves. However, this graphic novel also had to tackle such issues as the mass media, U.S. politics, criminal rehabilitation, and even the cold war. What does Batman have to do with the Cold War? Comparatively speaking, I think the Cold War theme was far more relevant in The New Frontier and Watchmen. 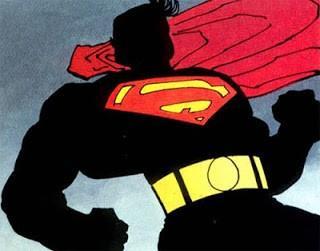 As a fan of the Man of Steel, it was hard to accept Superman as a government stooge, a utilitarian submitting to authority for the greater good. Personally, I think of Superman as a pure altruist, who does good for the sake of good and leads by example. The Superman I know would be incapable of compromising his sense of right and wrong. This may illustrate the evolution of Superman as a character and as an icon, how he started off as a crusader against social injustice, but somewhere along the way became a tool for propaganda.

Then again, this is a Batman book. For what it’s worth, Superman’s portrayal does work within the confines of the story, and I can buy that even characters like Superman can change over time. Also, some of my favourite Superman stories involved alternate histories with drastic changes to the character, so I shouldn’t be one to complain. 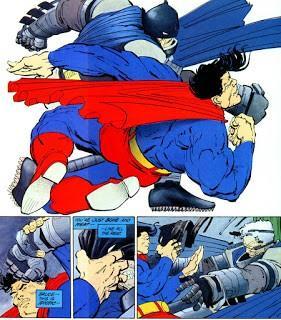 I gotta give you kudos on the fight scene between Batman and Superman. It’s an epic clash of the titans, and its awesomeness has not been equaled since. Batman (a human being) taking a stand against Superman (a god-like being) can be seen as an allegory of standing up to the status-quo.

The Dark Knight Returns is a fantastic Batman title.  it’s one of the pioneering graphic novels that revolutionized comics as a more realistic medium of storytelling.