Enjoy the ramblings of a madman

With all the hoopla in the MTG community about the Dominaria leak/spoilers, conversation about Masters 25 has fallen away almost completely.  But I wanted to dig my teeth into this set and take a look at some of the cool reprints we’re getting on March 16th (25 of them to be exact) and talk about some ideas for various formats to get your brewing brain working (assuming said brain doesn’t work as intended, like mine).

I believe I should preface this list by saying that these will not be the top 25 cards from the set, they will just be the 25 that I find interesting/appealing. (Don’t expect to see Jace on this…  alright, alright, Jace will definitely be on the list…)

With that said, lets get started. 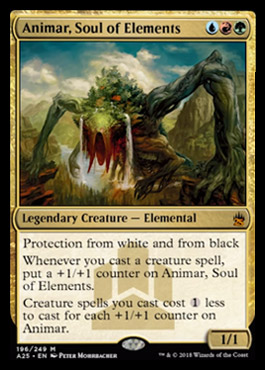 If you’re the type of Commander player who appreciates foiling out your deck, then there are a few reprints in this set that should have you salivating.  Animar is a beast of a commander, with many insane combo possibilities built right into him.  This is the first opportunity players have had to grab a foil copy to show off to their friends, so expect them to go quickly. 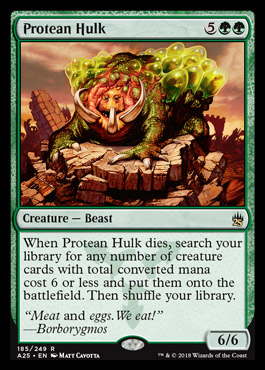 After his unbanning in Commander this past year, the price tag on good ol Protean Hulk skyrocketed.  If you’re a combo player who wants to play terrible creatures together and end the game out of nowhere, this is the card for you.  This reprint will hopefully help bring his price back down to a more reasonable level to grab your copy. 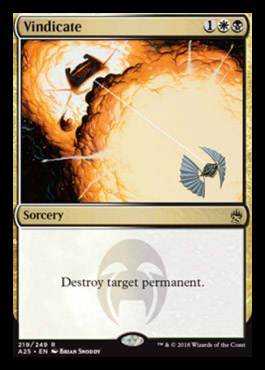 This is a great reprint to make this card slightly more accessible since it’s one of the best removal spells in Commander.  Vindicate is a favorite of every player that casts it. (don’t ask the opinions of the people on the other end…) 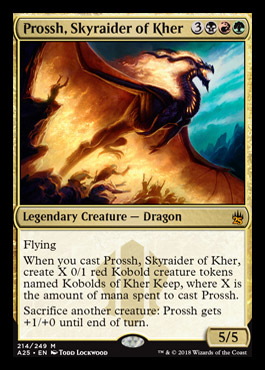 Animar is not the only Commander reprinting in the set that is available in foil for the first time, Prossh is an amazing commander, has beautiful art, and will be a fast sell in foil, so if you love dragons, eating creatures, and want your commander looking his best, this is your opportunity.  Grab it quick if you see it. 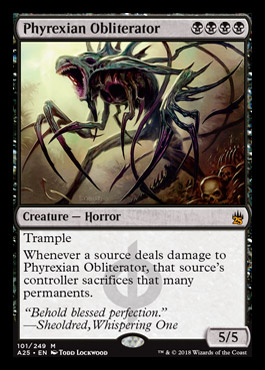 If you’ve ever sat across from a resolved Obliterator, you know it feels pretty bad for a few reasons.  First, you’re not going to block him, Second your red removal may as well have nothing printed on it, and Third, you probably don’t want to pay the price tag to have one of your own.  This reprint is a very long time coming and will hopefully help drop this monsters price tag down to a more reasonable place so more players can make opponents miserable. 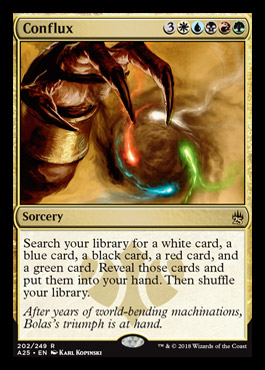 This card is an absolute powerhouse in Ramos, Dragon Engine decks.  It is netting you a full 5 counters on your commander (which translates to 10 more mana if you’re paying attention), and because of the vast rainbow of colors played in the deck, is likely to also net you 5 cards from your deck as well.  An amazing card that I for one look forward to resolving more than once. 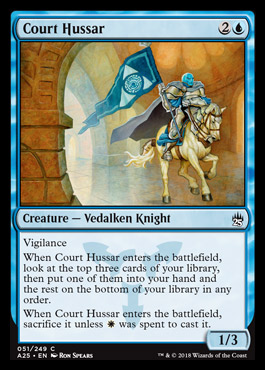 This is the first time Court Hussar has been available in Pauper, and although I certainly don’t expect it to break any decks in half, it’s a very powerful effect and a cool card.  He also sees play in the fringes of modern, normally tagged up with Sun Titan as a recurring value creature. 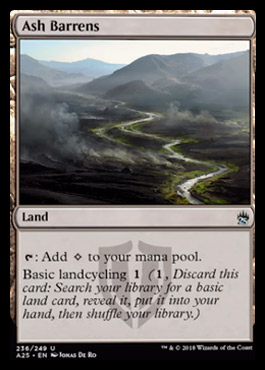 Pauper players know that since the printing of Ash Barrens, the variety in deck building has exploded because of the landcycling effecting.  Because this card only had one printing before this, the price had already started heading north, so it’s nice to see more copies landing in the wild to help keep the format as inexpensive as possible. 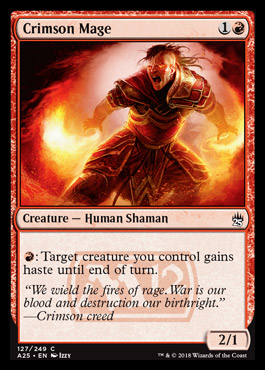 This is probably a bit of a surprise pick, but in pauper, the idea of giving Gurmag Anglers and our next pick haste, while burning your opponent out with madness cards and discard just seems too spicy to ignore.  This one may be a long shot, but it is the first time he’s been printed in pauper, so who knows. 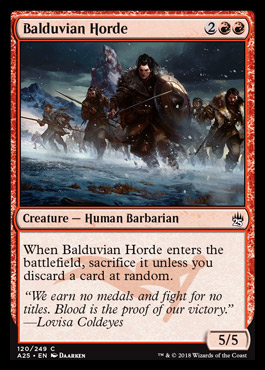 5/5, 4 mana, free discard outlet, in pauper the horde will have you wishing winter was coming a bit slower (come on, the card may as well have Jon Snow’s signature on it…)  But seriously, this is a very big body at a reasonable rate.  It could certainly make its way into pauper decks somewhere. 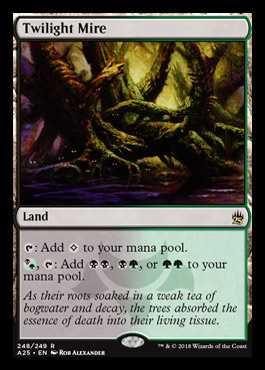 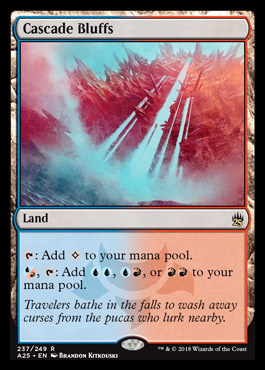 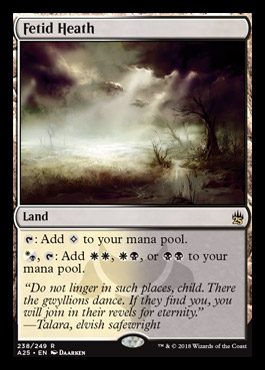 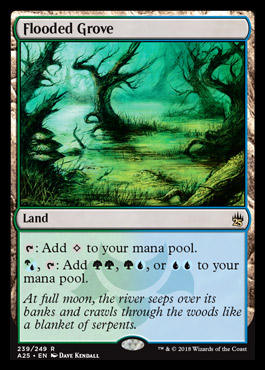 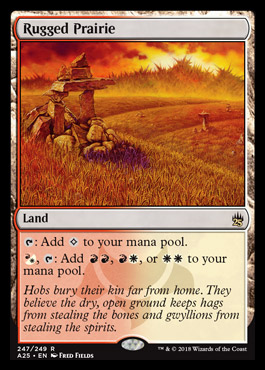 The reprinting of the filter lands is both an unexpected, and very welcome addition in Masters 25.  These lands don’t really see play at competitive levels, but it’s possible this was due to their prohibitive cost.  Hopefully this reprinting takes them to a price point that people can try slotting them into decks. 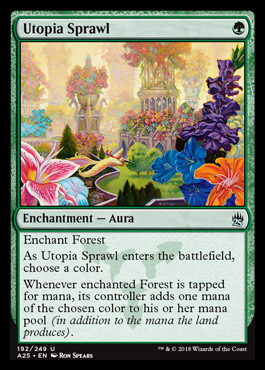 If you have never experienced casting a Turn 2 Blood Moon or Stone Rain on an opponent, you’ve never seen Utopia Sprawl at it’s finest.  In the GR Ponza shell in modern, this card is an absolute monster and allows for some very nutty opening hands.  It has slowly been creeping up in price and popularity recently, so this is a very nice reprint all around. 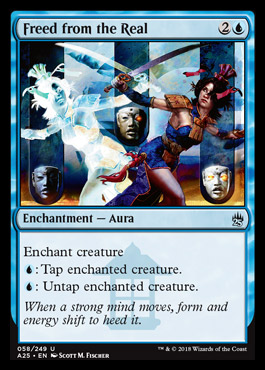 Alright, so I’m allowed to have a few really janky selections on the list, and this is definitely one of them.  If you can put this onto a creature that generates more than a single mana, you can generate infinite mana, which is both spicy and janky, my favorite combination of things.  (Oasis Ritualist comes to mind, I’ll let you go look that one up…  Hey, I didn’t say it would be a ‘good’ combo…) 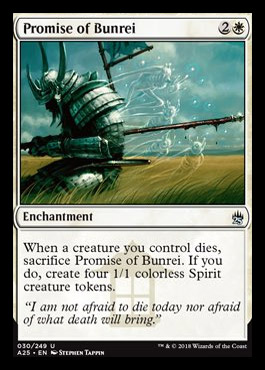 This card is another of my pet cards that is actually a very good rate for the effect.  It’s certainly no lingering souls, but in an aristocrats style deck, it’s 4 creatures for 3 mana, which is a very aggressive rate of return.  I think you could have fun with this in the right shell. 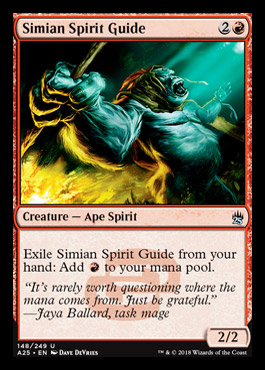 Whenever you see an opponent exile a mana monkey, you can be certain of one thing… they’re doing something degenerate.  SSG is seen floating all over the fringes of modern, and often at tournament tables in decks like Ad Nauseum.  A great reprint to keep the price in line and allow more players to enjoy the dark, degenerate side of Magic. 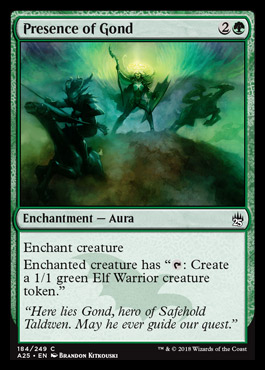 Did you really think Freed from the Real would make the list and this junk wouldn’t?  This card is a combo with multiple creatures who untap when a creature enters the battlefield, allowing you to create infinite creatures, and likely kill your opponent with something dumb like impact tremors.
On the jank scale, this is a 10.  Love it. 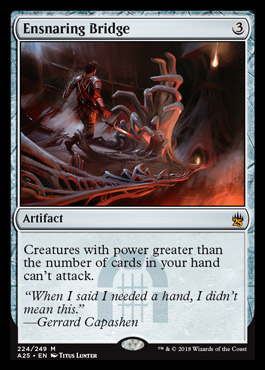 Ah Bridge…  with the rising popularity of prison decks like Lantern Control, bridge has become a common card to see at tournament tables, and although I certainly prefer the original Stronghold printing for its crazy art and correct (brown) artifact frame, this is a great reprint to restock the market with this card that is growing in importance for the modern format. 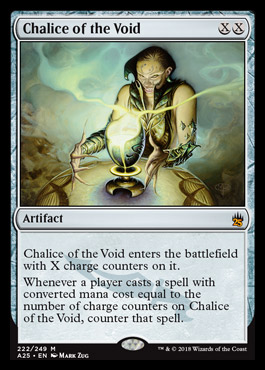 Another card that saw an explosion in play recently in Modern beginning with the Eldrazi Winter, and has sustained in a variety of decks ever since, the most popular being Eldrazi Tron.  People have complained at the upshifted rarity, but at any rarity, this was a great reprinting to increase supply.

23 – Eidolon of the Great Revel (Modern) 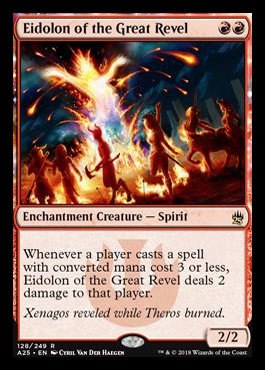 A staple in modern burn lists, this card had only seen its original printing, and was pushing the price tag of burn lists higher and higher.  This printing is likely to drive that price down to the point that burn may be the budget choice for many players.  This card is a beating when you sit across from it. 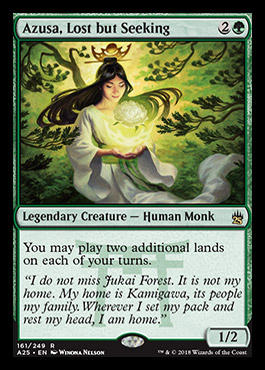 Amulet Bloom is still alive and well despite what some folk may have you believe.  Azusa is a staple in that list, and has started to see fringe play in GW/GB Value lists combined with Ramunap Excavator and various other landfall creatures.  Her price tag had really blown up over the years, so this reprinting will give more players a chance to learn how priority works when making land drops… 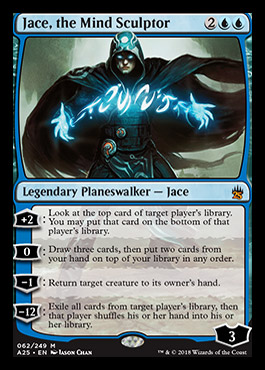 Alright, you made it all the way through the list, so here he is, the face of the set, the format breaker, the unbeatable, unbelievable, how could they unban him, wallet sculpting planeswalker that has the internet up in arms.  So what’s the story? what are my thoughts?
He’s pretty good man, if you don’t already have your copies, you should probably get some.  He’s going to show up in a million lists while people try to break him in modern.  Personally, I’m interested in using his very rare “put cards from your hand on top of your deck” ability to do something janky and terrible.  Why play Terminus, when I can put Emrakul on top and cast Aethermage’s Touch?  or put an Emrakul second from the top and cast the aftermath side of Reason // Believe?

What’s that?  those aren’t as good as just playing Miracles or U/W control?  Why in the world would you let that stop you??  Bad is the new good!

Dust off your brewing caps on and enjoy all the fun stuff in this set.  Do yourself a favour and try to find a group to draft the set with, I promise you’ll have an amazing time.

Thanks for taking the time to read through this nonsense!